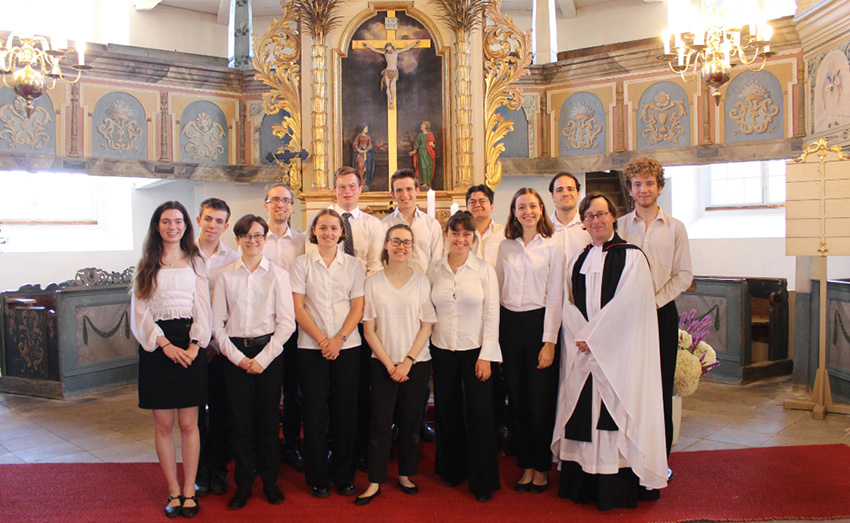 In July 2022 Exeter College Choir took its first tour abroad since the pandemic. While all members managed to avoid catching Covid, the weather conditions posed their own set of challenges. Boarding the plane at Luton during the UK-wide heatwave, the temperature was uncomfortable and shortly after departure soared so high that the runway melted, leaving later flights suspended!

Having arrived safely in Prague, the Choir was able to spend some time sightseeing. This included visiting various museums, such as the Muzeum Antonína Dvořáka and the Galerie Rudolfinum, watching the changing of the guard at Prague Castle, and being filled with good things, such as waffles! While the musical side of the tour had unofficially begun with a rehearsal in the fifteen-person AirBnB on arrival, the first concert was the following evening. This took place in the Anglican church of St Clement, and included works written by Amy Beach and Ola Gjeilo.

Day three marked the next stop on the tour – Dresden, and the opportunity to explore another historical city, before taking the train to Obercunnersdorf. This proved to be the hottest day of the week and the spirits of many rejoiced at being greeted on arrival with cold refreshments. Choir was then scattered into two groups – one of which was hosted by the villagers, and the other by Exeter’s chaplain, the Rev’d Andrew Allen, who owns a house there. This also gave us the opportunity to meet Tallis, Andrew’s dog – another highlight, for our eyes had seen him previously only via the attachments of various emails publicising evensongs!

The next day, following a long hike through atmospheric woods, Exeter Choir joined forces with the local choir for a choral workshop led by Michael Koenig (Graduate Organist at Exeter), before having dinner with locals of all generations. This was a really lovely experience because it gave us the opportunity to give something back to the community who had welcomed us so warmly – even if this did largely consist of boosting the tenor section!

Between rehearsals there was also time to visit a local swimming pool with multiple water slides, and on day five we gave a concert in the village church. The Choir performed a range of music including William Byrd’s “Mass for four voices” and the “Cantique de Jean Racine”. After the concert, as part of the celebrations of the 800th anniversary of Obercunnersdorf, there was a village rave, which the Choir was also invited to.

Day six, Saturday, was a welcome respite from the intense schedule, and entailed some baking and many rounds of popular quiz game, Kahoot! This was in preparation for the post-service gathering on Sunday where, amongst other things, Choir performed a cantata by J.S. Bach (BWV 79) for the festal service of Obercunnersdorf’s 800th anniversary.

The next day the tour came to an end in the same fashion as it had begun – with a group of sleep-deprived choristers in an airport. In short, the week was a fantastic experience and has created so many amazing memories! 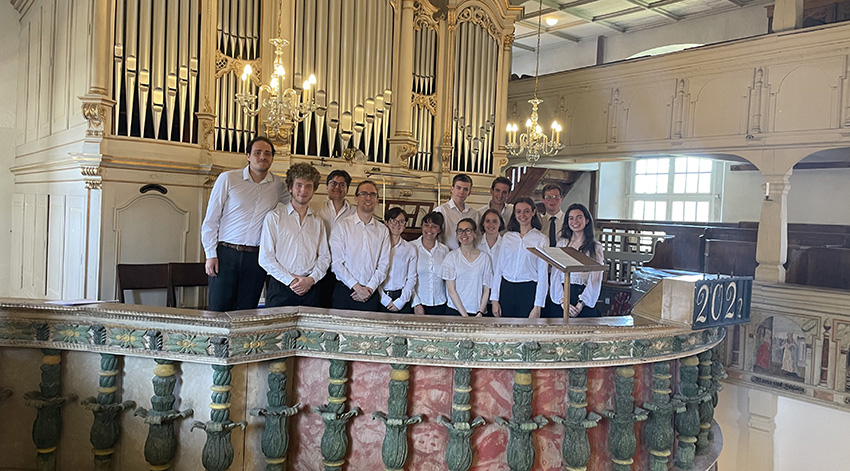