A production of Carrie: The Musical had Exonians out in force, producing, starring in and supporting the play. Phoebe Mumby (2020, English) reports.

Four Exeter Students, including our very own JCR Music, Arts, and Drama Rep, took part in an Oxford Playhouse production of the hit show Carrie: The Musical last weekend. Filled with catchy musical numbers, high school drama and a prom night not to be forgotten, the musical was not one to be missed! Not only was the production a representation of the amazing talent and hard work of Gianna Foster (MAD Rep starring as Sue Snell), Kitty Debiuex (Assistant Director), Lucas Ipkendanz (Marketing Assistant) and Matt Lister (Guitar), but the Exeter turnout in the crowd for the Saturday night performance of the show was a credit to the hugely supportive community of the College. 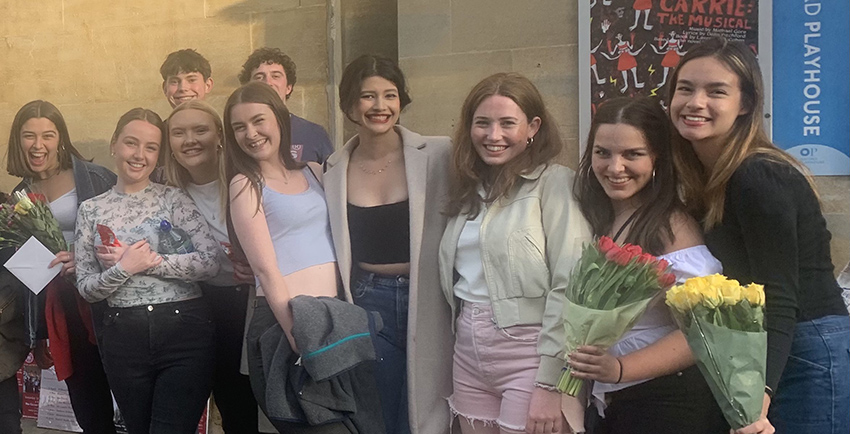 Exeter students queued up to see Carrie: The Musical

Gianna, Kitty and Lucas all share their thoughts on the experience below:

I absolutely loved every minute of being in Carrie: The Musical! I have always loved doing music and drama and that’s why I love being the MAD Rep at Exeter, but I was so nervous to audition for Carrie as it was my first audition for an Oxford University Drama Society show!

I feel so grateful and lucky to have been a part of such a fun experience and for all of the help that I got from the rest of the cast and team too. I was over the moon to see so many Exeter students come to support Lucas, Matt, Kitty and me on the final performance on Saturday Night! Carrie is one of the best things I’ve done during my time in Oxford and I will never forget it.

I’m so delighted that I had the opportunity to be assistant director of Carrie, working alongside fellow Exeter students Gianna, Matt and Lucas. I feel honoured to have been involved in a production with so many talented, creative, hard-working people. I have learnt so much about the process of putting a show on stage, as well as meeting a whole new incredible group of friends. The support from the students of Exeter really blew me away. I can only hope to be involved in another production in the future that is equally fun to create and so well received.

I worked on Carrie as a marketing assistant, meaning I worked with the rest of the team to run the social media, put together the promotional Scratch Night at Freud and generally make sure that people knew the play was happening. I had a great experience getting to interact with both the cast and crew (who were both awesome). Although things may have got a bit stressful at times it’s a great environment to work in where everyone’s committed to making something that they’re proud of.

A huge well done to all the students involved in this incredible production!