Patrick Oliver (2019, Medicine) and Jenni Lyman (2020, English) report on the work they've been doing in their roles as JCR Class Reps.

Exeter Class Act is a thriving group within the JCR, formed of students who are impacted by class issues and run by two elected officers: Jenni Lynam and Patrick Oliver.

At the start of this year, as class officers, we decided that ‘class’ should be a self-identifying term and therefore membership to the group was open to anyone who considered themselves to be affected by class in any way. We wanted to make Exeter Class Act as welcoming as possible.

Throughout Michaelmas Term, we ran a series of initiatives to create a connected network amongst members of Class Act, as well as to open an ongoing discussion about class issues with all members of the JCR. We started the term by running a class workshop for all incoming freshers. This involved presenting ideas around class and considering its impacts upon university life. The most important part of the workshop was figuring out how all members of the JCR can contribute to an environment at Exeter which confronts and works to overcome class issues that students may face. As well as the initial workshop we ran social events for members of Exeter Class Act including pub trips and walks.

To finish the term, we decided to organise a formal dinner that was open to all members of Exeter Class Act. A crucial part of organising the formal was to subsidise its price, in order to make the event accessible to all students who wanted to attend. We took a motion to the JCR, asking for £500 to subsidise ticket prices. The motion passed, allowing our event to take place. This was an incredibly important JCR motion and demonstrated that the student body of Exeter is receptive to discuss and support the combat of class issues.

Attendance at the event was open to friends of Exeter’s Class Act community. In particular, members were invited to bring their friends from home, in order to open the experience of a college formal to people who have never had the opportunity to attend one. This meant that there were 98 people who attended the formal, which filled the dining hall with a great atmosphere.

We were very grateful to have Jeri Johnson as an attending Fellow at the formal. Jeri expressed her pride at the event and pointed out that an event like this had never taken place in Exeter before, adding that it should certainly be repeated in the future. We were also extremely grateful to have Exeter alumna Safa Sadozai attending the event. After graduating from Exeter last year, Safa works at the Student Union as the VP for access and academic affairs. Safa gave a thrilling speech in which she addressed her own university experience and discussed intersections of class and how it shaped her time at Exeter. It was uplifting to hear someone speak about class issues as openly as Safa did – something the event aimed to promote.

The Exeter class formal was certainly a success which brought together a huge network of students and friends who identify with class issues. We hope that events of this nature will be repeated in Exeter’s future. 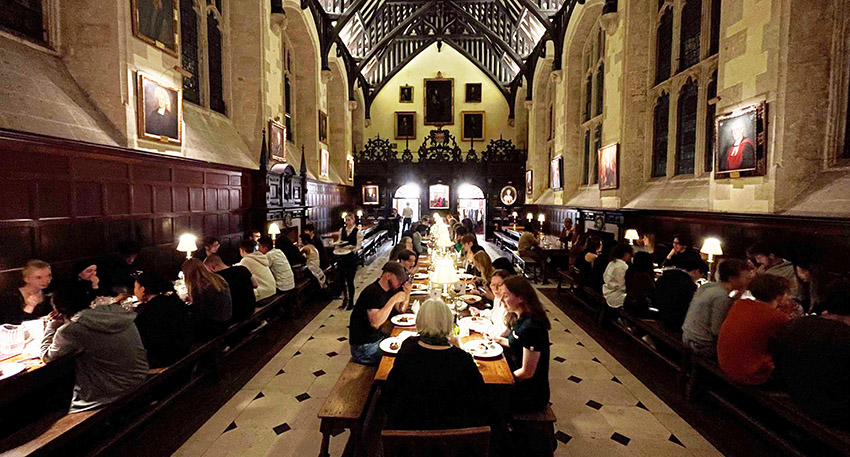