Exeter students take Hands and Flowers to the Edinburgh Fringe

Attachment styles, Yiddish drag and Bergson’s theory of time … Hands and Flowers, by Costi Levy (2019, Philosophy and Modern Languages) and Lily Sheldon premieres at the Edinburgh Fringe next week.

Through the story of five Jewish young people, Hands and Flowers investigates communication and love languages. Oscillating between a pub and a bedroom, the play asks, what is connection? And where is the line between fantasy and reality?

The production’s cast and crew features a strong Exeter cohort. Jack Klein (2020, Philosophy and Modern Languages) plays the part of ‘Guy’, and Lucas Ipkendanz (2020, Chemistry) is lighting designer, following success on multiple Oxford drama productions this year. Sarita Williams (2020, English and French) and Costi Levy are collaborating on the production as assistant director and director, respectively. The team are currently rehearsing the production, ahead of travelling up to Edinburgh on the weekend.

Hands and Flowers is on at theSpace @ Surgeon’s Hall from the 23rd until the 27th of August at 14.40. Tickets are available here. 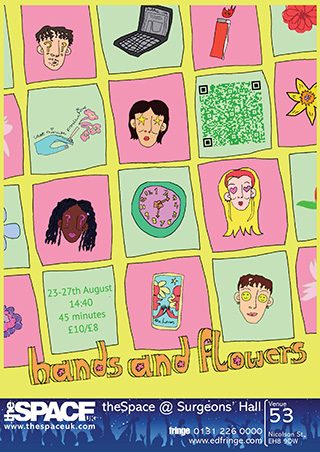