On 5 November 2016 a 70-strong group of sportsmen and women from Emmanuel College, Cambridge, Exeter’s sister college, arrived in Oxford ready to do battle with Exeter in the inaugural “College Varsity”.

Over the course of the day students competed in football, rugby, netball, hockey, and squash.

Before the start of play, Exeter looked like the clear underdogs on paper. Emmanuel, or Emma as they are more affectionately known, is one of the wealthiest colleges in Cambridge, and it consistently dominates both academically and on sports fields. That said, never underestimate Exeter and its students’ fighting spirit!

The day began on the rugby field, with an incredibly close-fought match narrowly won by Emmanuel. Emmanuel also won the girls’ netball and the men’s second-eleven football. A hugely impressive 5-1 victory for the women’s football team was Exeter’s only cause for celebration in an otherwise disappointing start for the hosts.

The men’s first-eleven football team secured a point for Exeter with a penalty shoot-out win. Exeter’s mixed hockey team also won and, after a defeat in mixed netball, there was just a point between the two colleges, the score 3-4.

All eyes turned to the squash courts for a crucial match, with Exeter’s hopes pinned on George Peel (2015, Literae Humaniores). George, the captain of Exeter’s squash team, saved a match-point before fighting back to secure the vital win for Exeter. This tied the scores at 4-4, and deservedly earned George Exeter’s Most Valuable Player award in the process.

Students from both colleges made their way to formal dinner in hall, which was enhanced by an entertaining speech from Philipp Kukura, Fellow in Physical Chemistry.

Naturally the first ever “College Varsity” warranted a trophy, and neither college had any intention of allowing the honours to remain even. Everyone made their way to the undercroft bar for the final showdown of the day: a winner-takes-all game of Twister. Exeter’s Amalgas Officer, Alex Urwin (2015, PPE), and its JCR president prepared to take on Emmanuel’s JCR president and vice-president.

What followed was as intense as any of the sporting endeavour that had preceded it and, after a highly contentious decision from the referee, it was Emmanuel who secured the win. 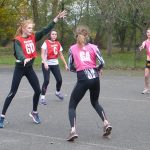 This was an exceptionally entertaining and enjoyable day, with well over 100 students competing in both shades of Oxbridge blue. It is the shared hope of both colleges’ JCRs that this “College Varsity” should become an annual event. With luck, 2017 will be Exeter’s year!