Alumnus Neil Roberts (1957, English) has published his memoirs, A Lucky Life. He was persuaded by his son and an ex-student to write about ‘his ordinary life that has occasionally been quite extraordinary’, and he put pen to paper during the coronavirus lockdowns.

With much laughter and wit, the book takes the reader on an insightful journey, from a wartime childhood, a youth during the post-war years, National Service in the Army, and then Oxford, to a varied career in Education and a lively family life.

Roberts reveals 1950s Oxford life, and you will recognise a few familiar Exeter names! From Nevil Coghill who gave him a place at College, Jonathan Wordsworth who tutored him, the ‘wonderfully droll’ Rector Kenneth Wheare, Junior Common Room President Alan Bennett (1954, Modern History) premiering sketches for the world-changing ‘Beyond the Fringe’, to years later meeting Professor Marilyn Butler, Exeter’s first female Rector (1993-2004) who, Roberts discovered, was the very bright sister of a school friend living but two streets away in wartime Kingston.

Reflecting on attending Exeter College with great affection, Roberts writes, ‘it remains one the of the best choices of my entire life.’

After leaving Exeter, Roberts taught in Kent, then in Leicester as department head in a grammar school, becoming a Vice Principal when it became a sixth form college. He has also spent nearly five decades in senior examining roles for 16+ national and international literature Syllabi, playing a major role in widening the range of texts and encouraging student imaginative responses.

The book’s publisher, James Essinger, writes in the foreword: ‘Neil Roberts is a truly amazing person and a wonderful teacher.’

A Lucky Life is available to purchase on The Conrad Press website and most retail outlets. 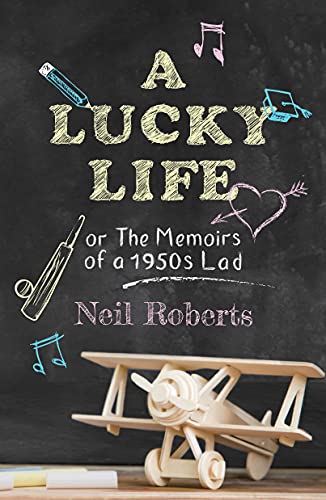