From Exeter to All Souls: in conversation with David Addison

‘The version of me who went on UNIQ would have no idea how to behave here’, says Dr David Addison (2012, History), Examination Fellow at All Souls College, Oxford. David’s journey to the prestigious fellowship that he currently holds, in which he researches the history of lay religion in the Iberian Peninsula from the Late Roman Empire to the end of the Visigothic kingdom in 711, started in the summer of 2011 when he attended UNIQ, the Oxford residential which encourages more state school students to apply to the University.

After being encouraged to apply to the summer school by a supportive sixth form teacher, David was inspired by the academic intensity, drive and creativity that he found at Oxford and applied to Exeter to study History. He fondly remembers his time as an undergraduate, commenting that College was a ‘space where we felt free to follow our own intellectual trajectories’. He then studied an MSc at the University of Edinburgh in Late Antique Islamic and Byzantine Studies, which he describes as an ‘intellectual gap year’ that diverted somewhat from his normal academic focus, as well as ‘a melting pot of people from different interdisciplinary backgrounds’.

After completing the first year of his doctorate at Mansfield College, David undertook the famously competitive entrance process to All Souls, which he was already aware of as a centre for late antique studies. He says that the exams were ‘in some ways less scary than doing GCSEs,’ in the sense that ‘you can’t fail them—you don’t expect to get in, you either get something very remarkable and life changing, or you just go back to your normal studies.’ The College is infamous for the open ended nature of the questions in its General Paper, such as ‘Why travel?’ or ‘Defend the indefensible’. David comments that ‘you feel a lot less certain of yourself—in general papers, you can feel as though you’re monologuing into the ether.’ However, the most nerve-wracking moment for him was being invited to a ‘viva’, a short conversation with examiners and fellows about the candidate’s exams. He passed the process successfully and started his fellowship in 2017.

On the many myths surrounding All Souls, David dismisses the legend that candidates get tapped on the shoulder to be invited to apply or that all prospective applicants have to have first class degrees. The reality of College life is one that is always changing: ‘One thing that I’d say that surprised me, and often surprises people, is how often the fellowship changes. We often have people visiting from other universities—people sometimes have the sense of All Souls as a very static institution, but it doesn’t feel like that to me.’ He also praises the benefits of the seven-year fellowship: ‘It’s rare to get that much space early in your career—it allows you to take more risks. You can pursue avenues of inquiry which might take a couple of months. It might turn out to be something interesting, or it might turn out to be a dead end, but you’ve got the time to do that. Negative results are often as important as positive results!’

Having recently finished his doctorate, David plans to spend the last few years of his fellowship realising article ideas, considering book contracts for said doctorate and perhaps even moving beyond Spain to look at the history of other countries in Late Antiquity. But his risk-taking attitude will surely encourage great success in his future academic endeavours. 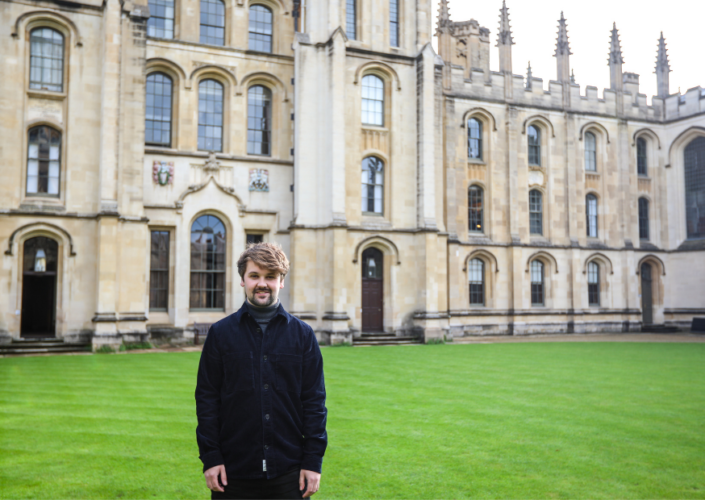