Peter Miéville to direct The Way Ahead

Peter Miéville (1971, English) is bringing The Way Ahead to the ADC Theatre in Cambridge. It will be the third play written by Miéville and directed at the ADC.

A couple are on a journey in their car. As they try to unpack difficulties within themselves and between one another, a strange event launches them into the unknown.

The story is set in the north-west Highlands, a raw and very ancient landscape, where myth is latent. As the characters journey deep into the wilderness, the surreal emerges, and they find themselves connected with something that is far beyond themselves, central to their quest.

Music, lighting, and sound combine to create a world of duality. There is darkness and light, ambiguity and lucidity, and within such rich reflectiveness, moments of lightness and humour.

‘It’s exciting and challenging, as director, to seek ways of engaging audiences, in a new play, with an unusual subject’, says Miéville. We look forward to seeing The Way Ahead at the ADC Corpus Playroom in December 2022. 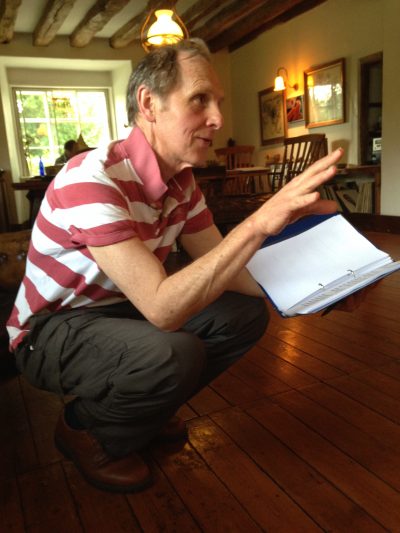 Peter Miéville rehearses The Riddle of the Sea in 2017