The publication studies how Spanish-American writers and veterans at the turn of the seventeenth century used epic poetry to search for ethical solutions to the violent conflicts of their age.

By considering the Hispanic literary tradition alongside the history of political thought and studies of empire, colonialism and globalisation, Choi reinterprets three major works of colonial Latin American literature: Alonso de Ercilla’s La Araucana (1569-90), Pedro de Oña’s Arauco domado (1596), and Juan de Miramontes Zuázola’s Armas antárticas (1608-9). Through the imaginative mirrors of epic, the reader is forced to ask, when conflicting forces are divided by irreconcilable world views, even if the war is won, how is it possible to achieve peace?

The Epic Mirror was awarded the 2017-18 AHGBI-Spanish Embassy Publication Prize and was published by Boydell and Brewer in February 2022. A rare insight into the development of political thought in Viceregal Peru, raising questions that are palpably relevant today, The Epic Mirror is available here. 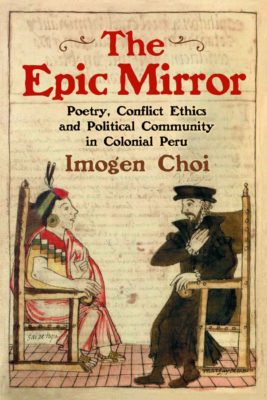