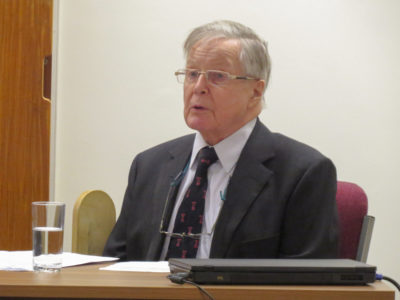 Correlli Barnett (1948, Modern History), who has died aged 95 on 10 July 2022, was an influential historian whose writing has challenged assumptions about the nature of Britain’s military past. For his writing, he was awarded the Cheney Gold Medal of the Royal United Services Institute for Defence Studies in 1991, and an honorary Doctorate of Science by Cranfield University in 1993.

Barnett’s 1960 book The Desert Generals catapulted his distinguished career. Still in print, The Desert Generals critiqued the North Africa campaign of World War II, shining a new light on the famous Field Marshal Bernard Montgomery. His subsequent publications traced the development of British imperial and industrial power, especially where they faltered or failed. The sweeping four-part The Pride and Fall Sequence documents the British elite’s entanglement with tradition and its effects on British power throughout the twentieth century.

Beyond his books, Barnett heavily contributed to public-facing historical media. As a co-author on the BBC docuseries The Great War, Barnett achieved the Screenwriters’ Guild Award for the Best Documentary Script. Barnett was a fervent social critic who reported on current affairs, from general elections to the Falklands War.

Barnett lived in East Carleton, Norfolk, and enjoyed gardening, interior design, and travelling in France. He is survived by his two daughters.