Exeter alumna, journalist and lawyer Shon Faye (2006, English) has published her new book, The Transgender Issue: An Argument for Justice, to widespread acclaim.

The book examines the many ways that society is currently failing transgender people, revealing how they are misrepresented, mistreated and discriminated against in terms of employment, access to healthcare, housing, the prison system and so on. It also reveals how, proportionally, trans people are more likely to be living in poverty, endure violence and sexual abuse, and to have mental illness problems and suicidal thoughts. By reclaiming the term ‘issue’, Faye illuminates how the media is reducing trans people to a talking point and denying them a meaningful voice.

The book has attracted praise from such important figures as Judith Butler, the seminal gender theorist and author of Gender Trouble, who called it ‘monumental and utterly convincing – crystal clear in its understanding of how the world should be’. The British and American press have also lauded the book, with columnist Owen Jones calling it a ‘game changer’ and Vogue magazine referring to it as ‘a moving and impressively comprehensive overview of trans life in Britain today’.

After graduating from Exeter, Shon Faye trained and worked as a lawyer, before focusing on her writing career full time. She was an editor-at-large at Dazed and has contributed features and comment journalism to The Guardian, The Independent, VICE, n+1, Attitude, Verso and others. She has also campaigned extensively for trans women to have access to rape and domestic violence services. In 2018 she presented at Amnesty International’s Women Making History event, where she gave a speech calling to ‘re-centre’ underprivileged trans women. She also hosts the podcast Call Me Mother, where she interviews older LGBTQ+ trailblazers.

You can purchase The Transgender Issue here. 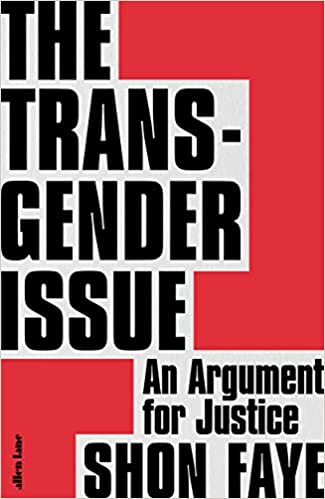