Several students have graduated from the Exeter College Summer Programme and gone on to study at Oxford, but this year Han Au will become the first to progress to a graduate degree at Exeter College. Here he explains his reasons for choosing Oxford and Exeter. 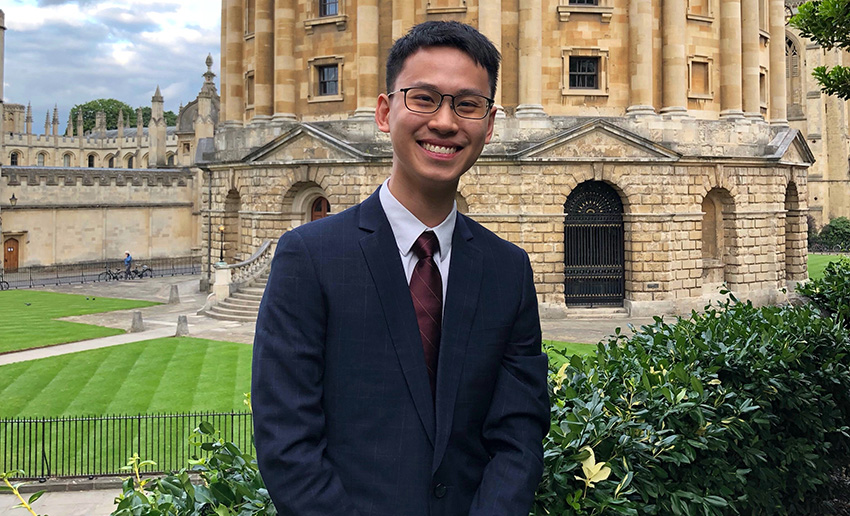 I applied for an MSt in English (1900 – Present) at the University of Oxford chiefly because of the school’s professors and resources. As I intend to examine the transnational histories of the Bloomsbury Group for my master’s thesis, it would be enlightening and exciting to learn from professors who are luminaries in the fields of modernist studies, cosmopolitan exchanges, and the Bloomsbury Set. I have also chosen Oxford because of its Ashmolean Museum of Art and Archaeology. It is the only institution in the world to hold key artefacts and manuscripts related to my research. Apart from the Ashmolean, the recently curated collection of Professor Dame Hermione Lee at the Bodleian Library, in which her works on Virginia Woolf are archived, is another resource that would be helpful for my project on the Bloomsbury Group.

Another admittedly whimsical reason for choosing to study at Oxford is because several twentieth-century novelists and poets whom I admire were former students at the University: Vera Brittain, T. S. Eliot, Oscar Wilde, Evelyn Waugh, and C. S. Lewis (I am interminably grateful to my friend for introducing me to Lewis’s essays). One can perhaps only put into words what it is like to live and be part of the school in which these writers studied a century ago when one becomes a student at the University.

While my decision to apply to Exeter College was based upon a similar literary basis, the choice was also guided by my involvement in the Exeter College Summer Programme (ECSP). Exeter was home to writers J. R. R. Tolkien and Sir Philip Pullman; their works had an early influence upon my reading of fantastical fiction and English literature at large. There is thus a yearning to be part of Exeter—the College in which they wrote, strolled, imagined, reflected, and studied when they were students at Oxford. Besides Exeter’s affiliations with Tolkien and Pullman, being a visiting student under the ECSP made choosing Exeter a straightforward one. Classes in the ECSP were modelled after Oxford’s famous tutorial system; with a ratio of one tutor to one or two students, tutorial discussions were challenging, personal, and focused. I enjoyed learning about Postwar-French literature and film from author Dr Anna Kemp, as well as modernist literature and theory from Dr Michael Mayo (2010, English; now a Fellow at Worcester and Lecturer at Exeter), and then DPhil candidates Gabriela Minden (2016, English) and Emelia Quinn (2015, English, Wolfson). Throughout the programme, I was able to use Exeter College’s 24-hour library. Not all colleges have libraries that are open round the clock, which, therefore, made Exeter stand out. I also had the luxury to reside in the elegant and beautiful Cohen Quadrangle. Besides being a place of residence, it has various facilities that are open to all students of Exeter: an archive room, various indoor study benches, plenty of reading rooms, a modern café, and a choice of two spacious quads.

These amenities at Cohen Quadrangle and the College library were a few reasons why I wanted to return to Exeter. Yet I also hoped to live in an area of which I knew nothing, to walk in unexplored streets, and to write about new spots and sights. When I was told that graduate students of Exeter would live at Exeter House, a place completely foreign to me, I knew, then, that being a student at Exeter would offer familiarity and unfamiliarity—a mix I was looking for when choosing a college at Oxford.