A detailed and comprehensive study, the book considers typographical changes of the printed page in the context of other cultural phenomena in eighteenth-century Britain. The account focuses on a wide range of texts, from Shakespeare to the classics, to the Bible, and relates changes in their printing conventions to landmark cultural changes, such as the adoption of the Gregorian calendar and the publication of Johnson’s Dictionary.

The study is one of many books written by Professor Wendorf focusing on the relationship between literary texts, visual arts and the history of libraries and museums. It is also a result of many years spent in the study and curation of books, manuscripts and works of art: Professor Wendorf held a Professorship of English and Art History at Northwestern University, directed both the Houghton Library at Harvard and  the Boston Athenæum and served as director of the American Museum and Gardens 2010-2021.

Professor Wendorf pays tribute to Exeter College in the acknowledgements of the book. Rector Trainor, his friend since the early 1970s, has described the book as ‘both wide-ranging and specific, an ideal combination. As someone once said, and as Richard has demonstrated, small keys unlock large doors, in this case very large ones’.

Printing History and Cultural Change: Fashioning the Modern English Text in Eighteenth-Century Britain was published by Oxford University Press in March 2022. More information about the book is available here. 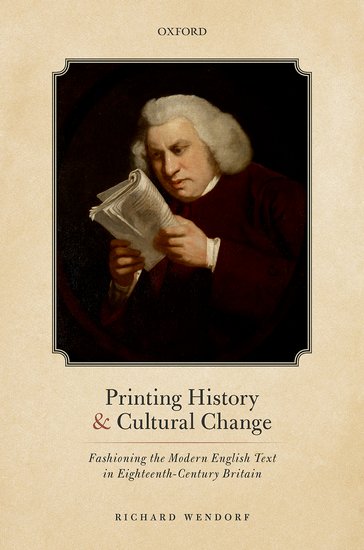