The awards were for ‘Project of the Year – Universities’ and ‘Inspiring Learning Spaces’, and a High Commendation in the ‘Client of the Year’ category.

In its 9th year, Education Estates is an annual gathering of all levels of the education community in Manchester for a Learning Spaces and Environments Exhibition, Conference and Awards Dinner.

The awards were announced and handed out at the Awards Dinner attended by Exeter’s Rector, Professor Sir Rick Trainor and Alison Brooks, Principal and Creative Director of Alison Brooks Architects.

Rector Rick Trainor commented: ‘I am delighted that Cohen Quad has been named the winner of the Project of the Year and Inspiring Learning Spaces awards at the Education Estates Awards. These awards recognise the exceptional facilities that our students and staff now enjoy at Cohen Quad, thanks in no small part to the generosity of alumni and other donors.

‘Both personally and on behalf of Exeter, I would like to send huge congratulations to all the team at Alison Brooks Architects on another well-deserved achievement for this magnificent building. I also congratulate the Exeter colleagues, past and present, who have done so much to contribute to Cohen Quad’s success.’

At the Conference, Rector Trainor and Alison Brooks gave a joint presentation on Cohen Quad on the topic, ‘Inspiring Learning Spaces.’ They gave fascinating insights into reinventing the Oxford collegiate model for the 21st century and designing a 6,000 sqm residential and academic ‘campus within a building’ in the heart of Oxford.

Cohen Quad was designed by Alison Brooks Architects and opened in January 2017. It provides cutting-edge research and teaching space, including the Neil Blair Special Collections Reading Room and the FitzHugh Auditorium, student accommodation, and social areas such as the Dakota Cafe and the Learning Commons.

These latest awards join multiple national and international prizes Cohen Quad has received, including a prestigious Civic Trust Award 2021, a World Architecture Festival Award in 2018 and a UK Roofing Award in 2017. 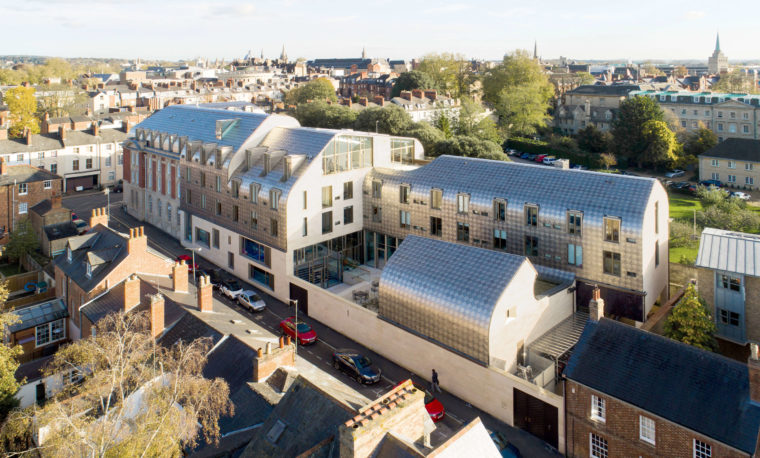 Exterior view of Cohen Quad from above Worcester Place